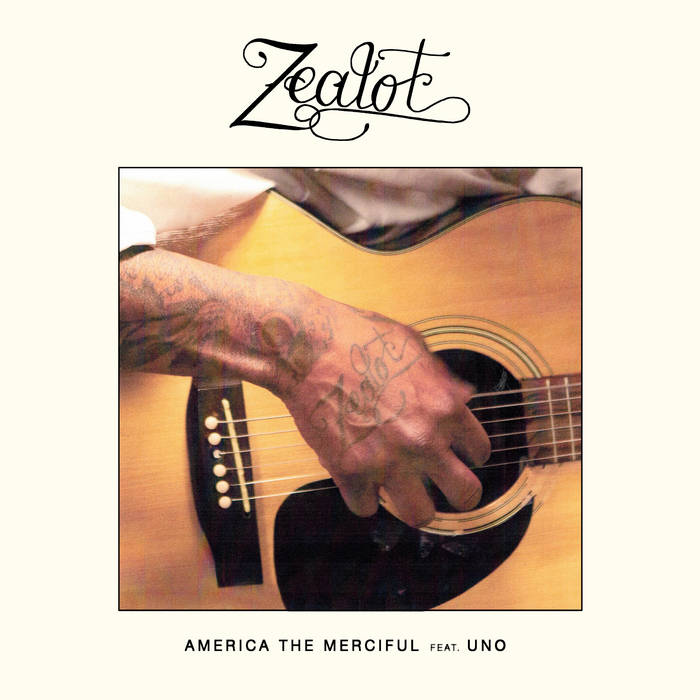 Dane Newton, who performs as Zealot, has been a ward of the state in Colorado since 2007. During his incarceration, Newton began playing guitar and singing despite limited access to band rooms and zero opportunities for recording. That would change in April 2018, when DJC producers Fury Young and dr. Israel spent four days at Colorado Territorial Correctional Facility recording songs for what was then a one-album project, the Die Jim Crow LP concept album.

While a small group had been practicing for these sessions months in advance, Zealot was skeptical and a bit nervous, and decided he would suss it out when the production crew actually arrived. The second day of recording, he showed up to the security entrance while Fury and Doc were checking in gear and asked Fury if, despite having missed day-one orientation, he could still have a shot. “How many songs you got?,” the producer asked. “One or two,” Zealot replied, his bravery showing signs of humility. “Okay sure, we’ll save two hours for you at the end of the day tomorrow. See you then.”

The following day “America the Merciful” was recorded in that short window of time; two hours in the 90,000 that Zealot had spent incarcerated during his ten plus years thus far. The newcomer singer-songwriter’s voice rang out in the band room that afternoon and an intense presence was felt. The officer on duty, the musicians who had been practicing for months, the producers from New York; they all felt what was a powerful song being laid to record.

Zealot, who is serving a 36-year sentence for aggravated robbery, describes the lyrics as “looking at how redemption might look in my life moving forward. How society, prison, people — [they] look at you a specific way and… it’s like I’m reaching out to do better [and] still having society step back with their arms folded and look at you as; no matter how hard you try, it’s just like chasing the wind.”

"I was sentenced to 24 and 12 consecutive [years] for aggravated robbery and [I was] thinking about some of the guys I’ve met while I’ve been in prison that have less time than that for murder. So you want to extend a level of mercy and forgiveness to someone who murdered someone and I’m in here for an aggravated robbery — you take the very best years of my life — it’s like how do you reconcile that concept on a personal level with your own life and your own actions?"

The song was arranged on the spot and recorded to a click, with Zealot specifying that a rap part was needed in between the first hook and verse two. Who that rapper would be, no one yet knew.

Two weeks shy of a year later, on the last Die Jim Crow LP recording trip (a formative one which pushed DJC to its record label metamorphosis), Fury and Doc would record a group of singers and emcees at Camille Griffin Graham Correctional Institution (CGGCI), a high-security women’s prison in Columbia, South Carolina.

An introverted young rapper by the name of Uno, who had recently been sentenced to Life Without Parole at the age of 19, showed up to these sessions with a rap she’d felt strongly about but had no beat for. When she rapped it for Fury, it clicked right away that these were the bars to complete Zealot’s introspective "chasing the wind” song — still untitled at the time.

On the last day of recording at CGGCI, Uno rapped her verse over Zealot’s guitar and a drum loop dr. Israel laid over it. There wasn’t much time left in the day, but Uno knocked it out in two takes. It felt right.

Another year later, nearly to the day, the song would see its final recordings at Creative Workshop in Nashville, Tennessee. Andy Dixon, who spent 27 years inside on a Life Without Parole sentence, had come on as Co-Producer for the Nashville sessions and brought in the best guns in town for the Americana sound the Territorial album called for. With the father-son percussion/bass duo of Austin and Anthony Valentine, and the multi-instrumentalist John Heinrich on flute and pedal steel, “America The Merciful” took its final shape with these Nashville maestros.

For both Zealot and Uno, it is an uphill battle to send in CDs which will actually wind up in their hands, so as of this song’s release, they have only heard "America The Merciful" through the phone. Uno later wrote in an email that she "loves the song," and Zealot described the feeling of its release as “unreal.”

“I wrote that song as some words on one sheet of paper,” Zealot recalls in a recent phone interview with Fury. “There were parts that were scratched out, words added in, pulled away; and when I was finished with the song I put it in my book and it sat there for like two summers. I didn’t even think anything of it. So, to hear now that it’s going to be on Grammy.com[*] and that people actually like it — I mean, where do you go from there?”

ZEALOT:
All my actions unforgetful
All my crimes beyond forgiveness
Have I lost my place with you?
Or the silence all I get

UNO:
I’m looking at the world nowadays
How it’s so unjust
Sitting on my bunk in a haze
Looking for words to sum it up
Money is the root of everything
Some people cannot make it enough
Society is blind in every way
Guess it’s time for me to come and get up
Everything is not what it seems
The small isn’t always weak
The quiet isn't always meek
There's a little bit of truth behind the lies
And the old isn’t always wise
I figure why work a 9 to 5
When I steady dream of a better life
You see thoughts turn to actions
That's the secret law of attraction
Evade the contraption
Of becoming a slave to fate
Don’t take the bait
Evolve.

ZEALOT:
I lost my way in my sickness
It’s the place where I found my peace
I can fall no further
Search no lower than this
I can lose nothing more
I’ve given all I have to give

UNO:
It’s time to rise
Blinded by the lies
Truth
Hidden
In front of our eyes
Perfectly disguised.
They usin confusion to brainwash
They remove them who refuse them just because
The real criminals are the ones who make the laws
Wake up - you workin for a pay cut
Just to give it back to the people who paid ya
Beep beep like a pager
I have your attention
Missing the picture in a critical condition
Let me start from the beginning
Yeah

released September 9, 2020
"America the Merciful"
The first release from the Territorial album.

Territorial consists of seven incarcerated musicians at Colorado Territorial Correctional Facility. Including several lifers, Native American and Black artists, a queer Jewish man, and a musician convicted for five counts of murder, these artists share their path from remorse to redemption.
The Territorial LP drops in Spring 2021. ... more

Bandcamp Daily  your guide to the world of Bandcamp

Benji B talks about his new compilation ‘Deviation Classics’